The feast of Don Bosco 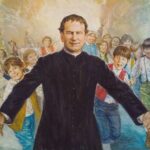 We celebrate the Feast of St. John Bosco (Jan. 31st), founder of the Salesian Order, committed to education. In 1845 Don John Bosco, an Italian priest opened a night school for boys in Valdocco. In the following years, he opened several more schools, and in 1857 drew up a set of rules for his helpers, which became the Rule of the Society of St. Francis de Sales, which Pope Pius IX approved definitively in 1873. The Society continues to operate worldwide; in 2000, it counted more than 17,000 members in 2,711 houses.

The enthralling story of the great modern apostle of youth, Saint John Bosco, and his best-loved pupil who became a saint, Dominic Savio is one that resonates in our society today. Blessed with tremendous natural and supernatural gifts, including a wonderful sense of humour, Saint John Bosco overcame overwhelming obstacles to help deprived children find a better life He was a juggler, magician, acrobat, tailor, teacher and writer -John Bosco became all of these in his efforts to lead boys and girls to God. A prayer was the price of admission to his shows; a friendly contest to match skill or strength was his answer to the hoodlums who laughed at him. As a priest he was known as Don Bosco and built churches and schools.

To find out a little more about him have a look at this short leaflet and feel free to share!

Manage Cookie Consent
To provide the best experiences, we use technologies like cookies to store and/or access device information. Consenting to these technologies will allow us to process data such as browsing behavior or unique IDs on this site. Not consenting or withdrawing consent, may adversely affect certain features and functions.
Manage options Manage services Manage vendors Read more about these purposes
View preferences
{title} {title} {title}